Bees play an essential role in our world’s ecosystem. They labour away to keep their hive, queen and their fellow bees alive, and by extracting and consuming their extra honey and other products we can experience amazing health benefits. Flax seeds and chia seeds are vital sources of protein, and play a secret role in vegan baking. The ancient Japanese tea kombucha has been claimed to lift the mood, and papaya is one of the softest foods your body can digest. Read on to find out more about these superfoods.

Travelling in a Peruvian village earlier this year I came across a bee farm which produced an astounding variety of bee products, most of which I didn’t know existed. Their delicious, beneficial products prove that bees are the top dogs of our planet, and the stuff they busily work away to produce can be very beneficial to us.

It turns out Winnie The Pooh has a lot of sense in loving honey as much as he does, and there are many reasons why drinking hot water and honey when we are sick is such a popular ritual. Honey is both delicious and nutritional, containing many medical properties aside from it’s famed antioxidants. Honey is almost completely free of fiber, fat and protein, and contains many calories and natural sugars: fructose, glucose, maltose and sucrose. Just one pound of honey is the life achievement of around 768 bees, flying over 55,000 miles and pollinating around 2 million flowers. Just one bee, produces around 1/12 of a teaspoon in their whole lifetime. Like all other animals, bees are amazing because of the way they work as a team.

If eating the honey bees produce isn’t great enough, we can also gain amazing health benefits from eating what bees eat: pollen. Bees extract pollen from flowers and return it to the hive to store, where it is mixed with nectar, enzymes, honey, wax and bee secretions. The results look like little pellets of orange and yellow colours. It is commonly found being sold cheaply in the smaller, mountainous towns in Peru, where lots of it is produced.

Bee pollen is so salubrious, it contains 250 different active substances beneficial for the body, including antioxidants, enzymes, vitamins, minerals and more. These reduce inflammation and protect against disease, as well as strengthening the immune system. You may have heard that the liver is the body’s most important organ, in the sense that it breaks down toxins and therefore works as your body’s own maintenance man. Bee pollen strengthens the liver’s capacity to do this, helping it produce more antioxidants and a greater detoxifying ability. The bee is the earths little labourer, and the liver is your labourer, together they are a good team. 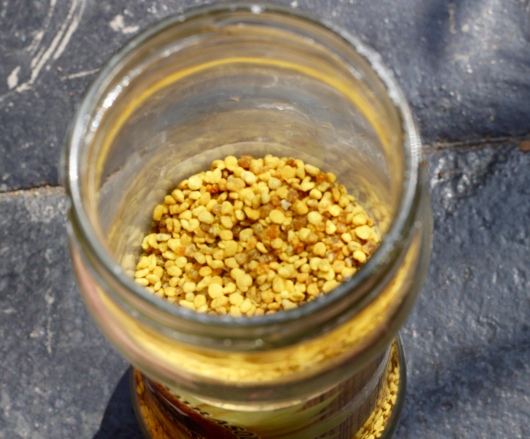 pollen tip: I sprinkle bee pollen onto cereals, into smoothies and sometimes just eat a spoonful. They can be bought at health food stores, and all over the outskirts of Peruvian villages.

Propolis goes on to affirm the theory that bees work magic. Propolis is a sticky substance which bees excrete in order to build their hives: it essentially fills in the smallest gaps. It is a combination of bee excrement, saliva, beeswax and the exudate produced by flowers and trees. Tree resin is an essential component of this dark sticky substance, and distinguishes it from the much sweeter honey, beeswax and pollen. It not only works to keep bees warmer in winter (essential to their survival), it also has many medicinal uses. Like pollen, it is anti-inflammatory; unique in that it fights bacteria, viruses, and fungi. According to the bee keepers I came across in Peru, propolis can actually work towards healing asthma. Ingesting small amounts daily for an extended period of time will assist in opening the lungs and improving respiration. It is a powerful, bitter liquid which comes in a small bottle, and I recommend squeezing three drops into a glass of lemon water and mixing it with honey to diffuse the powerful taste. 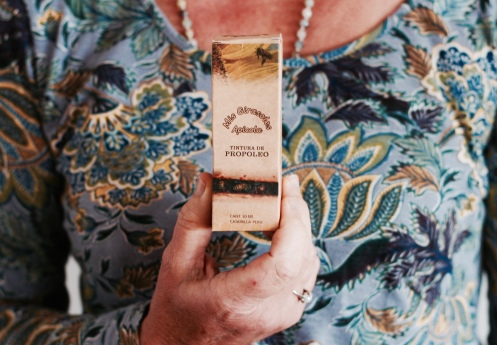 Propolis is bitter, so it is recommended to squeeze a few drops into lemon water and mix with honey to soften the taste

“The bee collects honey from flowers in such a way as to do the least damage or destruction to them, and he leaves them whole, undamaged and fresh, just as he found them.” – Saint Francis de Sales. I think everyone should try to be a bit like a bee.

Kombucha is a fermented tea which was first produced in Japan over 2000 years ago. Bacteria, yeast and sugar are added to black or green tea, which then undergoes a week long fermenting process. The cold, fizzy tea has received controversy over its health benefits, as many claims have been made but little scientific evidence has been produced. As there is not enough research but so many positive stories, I believe it is worth trying, particularly if you are someone who suffers from UTI’s or candida (which is caused by an imbalance of bacteria in the gut).

Kombucha is more or less a natural probiotic, because of the yeast which develops after the fermenting process. I say more or less because some claim that the healthy bacteria within the tea is burned by the stomach acid before it reaches the gut, but still science is not clear on this. It has also been recommended to me as an anti-inflammatory, and some believe it can be beneficial against depression in this way, a cause and side effect of which is inflammation.

Despite the uncertainties surrounding kombucha, I feel very good when I drink it, it tastes great and uplifts my mood, so i’d recommend taking a chance on it. Kombucha can be bought at most health food stores/markets, and in Peru you can find flor de jamaica (flower) maca and ginger flavours.

Brown or golden Flax Seeds (linseeds) are healthy, nutritious and perhaps most importantly an alternative to eggs in baking something vegan. Mix one tablespoon of seeds with three tablespoons boiling water in a bowl, to form a paste. The paste equites to one egg and really works to keep a cake (or pancake) together.

The flax plant is one of the oldest crops ever cultivated. A symbol of purity in Egyptian culture, it was used by them to wrap mummies. Charles the Great (700-800AD) advised his French armies to eat flax seeds to maintain optimum strength. Someone with great in their name is maybe worth paying attention to, even if they are great for some morally questionable reasons.

Flax seeds health benefits: optimum source of fibre, high in omega-3 fats they have even been correlated with a reduction in cancer rates. It is a great source of plant-based protein, and therefore highly recommended for vegans, vegetarians or anyone looking for an alternative to animal based protein.

Chia seeds are a health craze of 2019, and there is some sense behind this. Ever since buying them I’ve become a bit obsessed, mixing them into smoothies, sprinkling them onto fruits and using them to make granola. With chia seeds, you cannot get enough of what is just a good thing. The little black seeds come from the Salvia hispanica plant, and they are one of the best, purely plant based sources of protein. 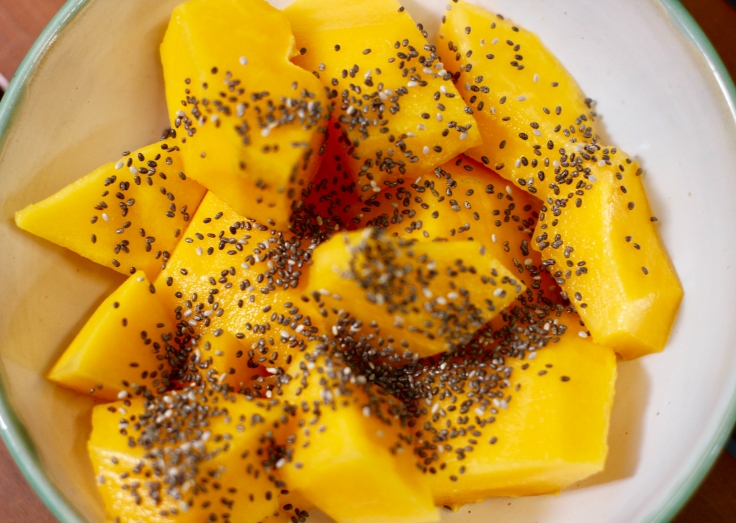 The word “chia” actually derives from the Mayan language, where it means “strength”

Chia seeds even have a historical importance, being essential in the diet of the Mayans and Aztecs. Now called a ‘superfood’, it appears it was considered this thousands of years ago, when ancient civilisations provided chia seeds as an offering to their gods.

They contain significant amounts of fiber, protein, fat, calcium, manganese, magnesium and phosphorus. They are organic, gluten free, and of course incredibly nutritious.

In the book ‘The China Study’, Doctor T. Colin Campbell puts forward a strong argument for the consumption of ‘slow’ protein in plants as opposed to ‘quality’ protein in animal products. He argues that whilst for a long times scientists have perceived the high amount of ‘quality’ protein in animal food as being better and faster for the body to consume, the reality is that plant based proteins are actually easier and more beneficial for the body to rebuild. He ascertains this after analysing the intricate process the body undergoes to reassemble chains of protein, which involves swapping and replacing different molecules. Fruits and vegetables such as the papaya do actually contain protein, albeit in smaller amounts than animal products.

If you know me well you know I had a life-threatening experience with peanuts a few ago, and woke up after suffering an anaphylactic shock in a small hospital in Ecuador. As you can imagine, the medicine and vomiting significantly damaged my stomach, and I couldn’t eat anything for days afterwards… apart from papaya. This Mexican Carica plant is one of the softest foods your stomach could receive. It’s composed of 88% water and 11% carbohydrates, which makes it incredibly easy to digest. Anytime I have a stomach illness or problem, I eat nothing but papaya until I feel better. All this and more, papaya has been used as a traditional medicine to treat malaria, to purge the body of waste and has even smoked as a way to help relieve asthma.

A papaya in the sun